Ranked is the process through which the system players into opposing for public games. With the exception of bot games 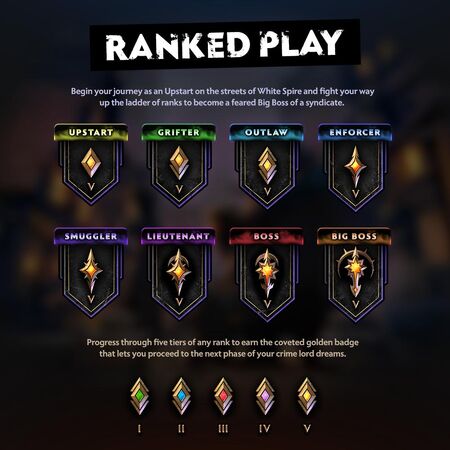 Each rank badge below Lord of White Spire is further divided into five tiers, indicated by colors and roman numerals.

Parties of up to 3 players will be allowed in Ranked multiplayer. If party members do not have the same rank, the highest rank is used for matchmaking. Also, for ranks below Lord of White Spire, the change to your Rank Score after a Ranked multiplayer match uses the following values.

Note that these tables do not extend to 8th place. That's because for the purposes of Rank Score update, your place is calculated relative only to non-party members. For example, if two friends party up and the first friend to be eliminated finishes in 4th place overall, his rank would increase by 33.

Players who achieve a rank of Lord of White Spire are assigned a number based on their position on the leaderboard of all current active Lords of White Spire. The leaderboard is updated once every hour, and position is determined by the players Rank Score at that time.

There are no additional restrictions on partying up in high rank matches. As in lower level play, players in the same party do not affect each others' Rank Score change. Additionally, for the purposes of updating the Lord's Rank Score, players below Big Boss are discarded.