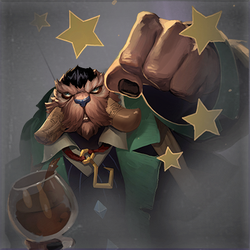 Knockout is game mode in Dota Underlords. It's a fast-paced version of the Standard mode. In Knockout, players combine heroes more easily, gain more base gold, level up faster, get items more frequently and pick an Underlord earlier.

At the start of the game, players are offered three random teams of five heroes with an option to reroll once. The starting team completes at least one level of at least two alliances.

Starting heroes are worth 0 gold (identified by the

icon) and when combined their selling prices are adjusted accordingly.

heroes combine into a

heroes combine into a

heroes to create a

Players pick an underlord at the end of the first round. Underlords level up every two rounds.

Players start at level 5 with 1 XP and gain 1 XP every round. Leveling up requires 2 XP and cannot be purchased, so players automatically level up every two rounds.

Players start at 4 health and unlike in Standard matches where players take damage based on the opponent's surviving units, in Knockout players always lose 1 health every time they lose a round, regardless of how many units survived.

The base gold granted at the beginning of every round starts at six gold, increasing by one every even round and by two every odd round.

Round victories grant 1 gold. Win and loss streaks do not reward any gold.

Interest is not available in Knockout.

Items will be given every odd round.

Rewards can be earned by playing multiplayer matches or against Hardcore (XP) bots.

Battle Pass XP is rewarded based on your final placement.

The follwing wanted poster titles can be earned from Knockout matches.