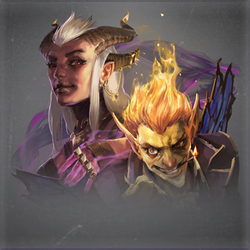 Duos is a game mode in Dota Underlords where 8 teams of two players fight each other. In this mode teams share the same health and player level. Players can also send heroes and gold to their teammate.

Similar to Standard mode, teams start with 100 health, but damage is dealt according to the following rules:

Player level is shared between both players. Teams gain 2 XP every round.

The total number of heroes available in the match is twice as much from Standard.

Players can send 1 gold to their teammate by pressing the

button below the shop.

Win streaks are only granted to players winning rounds while their isn't taking damage. Once the team takes damage, the streak is lost, even if that player never lost a round.

The following Wanted Poster Title will be rewarded for playing a Duos match. Can be earned by playing with Hardcore (XP) bots.