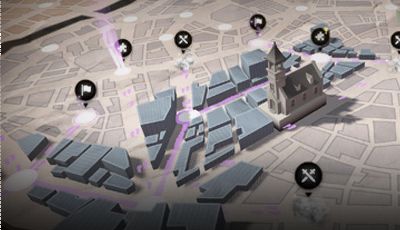 Each quarter of the city contains 36 challenges: 13 Objectives, 19 Street Fights and 4 Puzzles. Cleared challenges are removed, opening up paths to new challenges. Some challenges can be accessed for free while others can be unlocked by purchasing the Battle Pass.

Objectives are similar to daily challenges, except they are assigned to specific Underlords and can only be completed when using that Underlord. All the objectives progress even when Underlords haven't been picked yet. When the match is over, only the objectives for the Underlord you chose will progress. Objectives can be completed by playing against Hardcore (XP) bots.

Street Fights are Knockout-style matches against either fixed enemies or a bot with a restricted pool of Heroes.

Puzzles are single round matches where players need to win an scenario using only the options they are given. These options include a limited number of available heroes, available cells, available items and a maximum net worth (cost of units placed on their board plus tiers of equipped items). Player's units placed by default cannot be benched or sold, only moved, and do not count toward any limit. Puzzles use Standard mode rules regarding alliances and items stats.

Once a player wins a puzzle, their net worth, unit count and fight duration for that puzzle are recorded and can be used to compare to friends or to a global distribution. Unlike Objectives and Street Fights, Puzzles can be replayed at any time, giving the player an opportunity to try for a new record.

Before exploring City Crawl on their own, players need to play two tutorial challenges: Welcome to White Spire, a Street Fight against neutrals, and a puzzle The First Of Many Trials, detailed below.

Win a match against “First Of Many Victims” to gain control of the district.

▶️ “Momma Eeb knew that it was only a matter of time before someone would come to take her life. And so she was sure to leave behind a list of instructions for those that wished to take her place.

Momma Eeb made it clear what she expected of her replacement: a cunning mind to navigate the City of Dastardly Delights. A charismatic personality that would inspire loyalty and faith. And the willingness to do whatever it takes to win.

The First Of Many Trials

▶️ “Hobgen, Anessix, Jull and Enno were about to embark on the most dangerous of land grabs.

Many tribulations awaited those looking to be Eeb's replacement beyond simple street violence... scenarios and complications that not even these hardened criminals could predict.

City Keys allow players to immediately complete a challenge. Ten City Keys are rewarded from the Battle Pass and two are received when starting a Prestige.

Once a player takes over all the city, they are offered the option of Prestiging. Doing so will reset the campaign, removing all the Street Fight items collected, while keeping all the other rewards. All the rewards for the challenges will be replaced by Battle Pass XP.

Community content is available under CC BY-NC-SA 3.0 unless otherwise noted.